How to use the Rate of Change Column Formula

Written by John Burk
Updated over a week ago

Adding a Rate of Change column 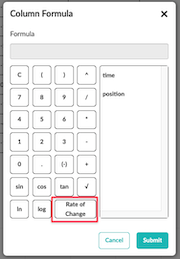 10. Click the column that you wish to take the rate of change of, [y], from the list of available columns in the column menu on the right side of the Column Formula Calculator.

Note: The Column Formula calculator only has access to columns that are to the left of the column you are calculating). This will replace [y] with the name of a column.

Note also that the red outline indicated that this formula is not a valid formula. 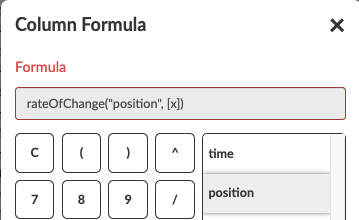 11. Click the column that you wish to take the rate of change with respect to, [x], from the list of available columns in the column menu. 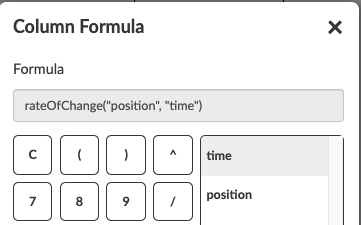 12. Press Submit. This will add a calculated column that is the rate of change you selected. You can adjust the formatting of the numbers from the Column Settings in the three dots menu for the column.

Note: You can also create column formulas that involve functions of rate of change using the calculator such as 2*rateOfChange, or ln(rateOfChange) just as you would for any other column calculation.

Here is an animated gif showing the entire process of adding a calculated column to determine the velocity from some position data:

Details of the algorithm used to calculate the rate of change

When designing this algorithm we wanted to use something that would be both powerful—generating a nice rate of change function for a wide variety of data, and easy-to-understand and familiar to students who are just learning how to calculate the rate of change.

Our algorithm begins by removing any rows where one or both of the values are missing in the selected columns. This allows us to calculate a rate of change for points where there is a gap in the data, so long as there are complete data points on either side of a particular point.

For each of the data points, our algorithm generates a weighted average of the slope of its surrounding points, subject to these four cases:

These weighted averages have the effect of smoothing out the rate of change function, which is particularly helpful for noisy data.